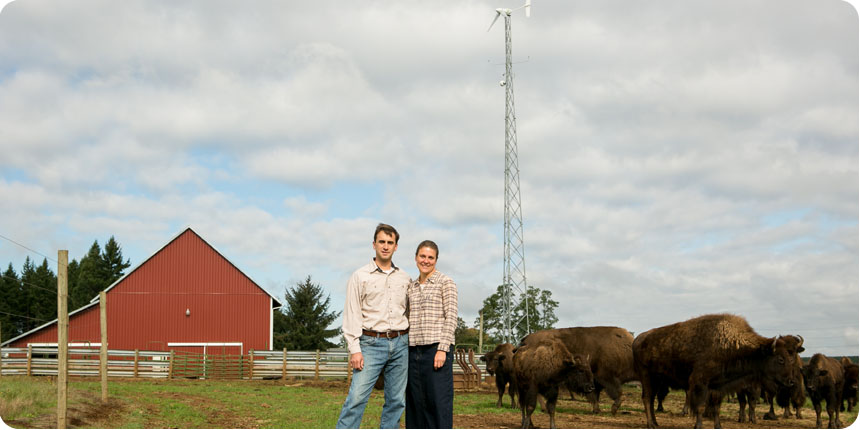 Located near Salem, Cascade Buffalo Ranch attracts visitors both for healthy bison meat and for the 10-kilowatt wind turbine that towers over the farm buildings and fields.

Owners Eldon and Alice Metz were always interested in generating renewable energy but began seriously considering a wind system after a representative of XZERES visited the site and ran the numbers. Energy Trust of Oregon cash incentives, plus federal and state tax credits, helped make the case. The locally manufactured XZERES 442SR system is expected to generate 12,000 kilowatt hours of renewable electricity annually, more than one-half of the farm’s electricity load. “The wind turbine has reduced our Portland General Electric bill by over $100 a month,” Eldon reported.

The couple is grateful for Energy Trust’s contribution, a cash incentive of $52,000, based on the estimated average annual electricity production. The incentive comes with the requirement that the system operate for 15 years, although small wind turbines typically operate for 20-30 years or longer if maintained properly. “We couldn’t have done this without Energy Trust,” Eldon said.

A small wind power system can pencil out for homeowners, ranchers, farmers and other property owners in a windy, rural area on at least one acre with plenty of open, unobstructed land. Oregonians have already installed 43 wind turbines in Oregon with Energy Trust’s help. Oregon customers of PGE or Pacific Power who qualify can offset up to 90 percent of the cost of installing a wind turbine with Energy Trust cash incentives plus state and federal tax credits. Learn more about putting wind to work.