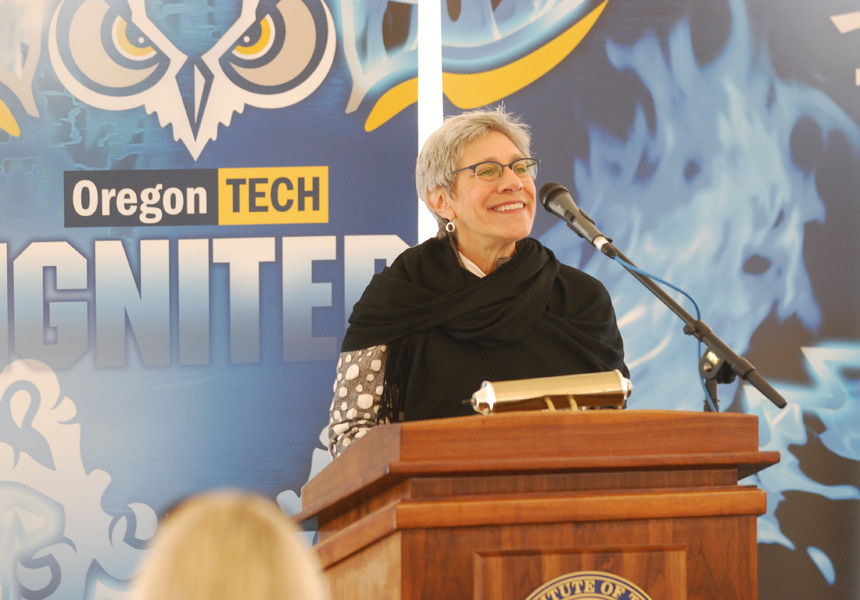 On April 18, Margie Harris, executive director of Energy Trust of Oregon, presented Oregon Institute of Technology (Oregon Tech) President Chris Maples with a $1.5 million check for a recently installed 1.75 megawatt geothermal system. With its Klamath Falls campus sitting atop geothermal springs, the university has now installed two geothermal power plants that, together with a solar electric system, make the university the first in North America to generate all of its electricity onsite.

As quoted by the Herald & News, Sen. Wyden applauded the projects: “As Oregonians, clean energy is practically in our DNA. Nothing in my view epitomized that more than Oregon Tech. You’ve got here a solar, geothermal project that provides an incredible value, not just to Oregon Tech, and the students here, but also to the Basin and to the state. It creates jobs, reduces our carbon footprint and saves money. That is a trifecta, my friends, in which everybody wins.”

Oregon Tech began using geothermal energy to heat campus buildings in 1964. Fifty years later, the university built geothermal power plants in two stages—cutting its teeth on a 0.28-megawatt module that was the first operating geothermal power plant in Oregon. The success of that system, followed by the ability to garner additional financial support, led to the installation of the recent 1.75-MW project. In combination, they generate an estimated 8,315,000 kilowatt hours annually, reducing energy costs by nearly one-half million dollars per year. Oregon Tech also installed 7,800 ground-mounted solar electric panels next to the John F. Moehl football stadium, with a total capacity of just under 2 MW.

Energy Trust helped the university achieve its renewable power goal with funding for design and feasibility studies for both geothermal projects, and provided approximately $2 million in incentives toward their construction and installation.
“The geothermal and solar projects all serve important and dual purposes for Oregon Tech,” said Maples. “They support the education of our students in the growing green jobs industry, and they put us closer to our goal of becoming a climate neutral campus by 2050.”