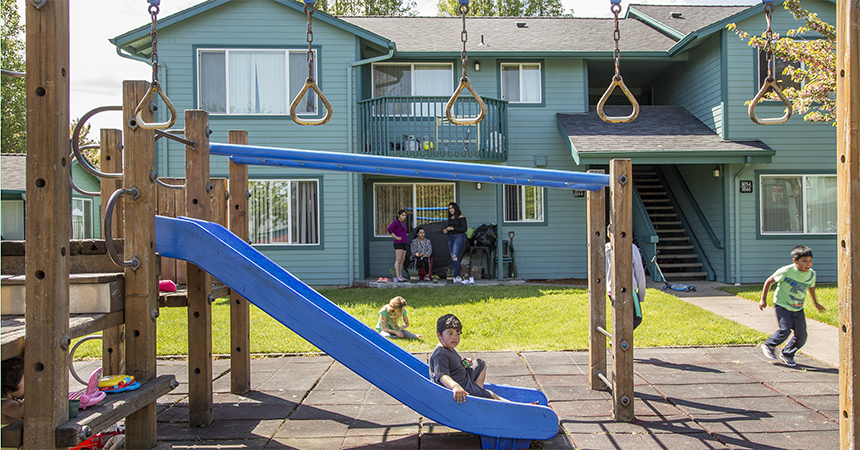 In recent years, Energy Trust has worked with affordable housing providers across the state to save thousands of dollars a year on energy costs, from Polk CDC in Dallas to Valley Pines Apartments in Medford to Northwest Oregon Housing Authority in Astoria.

“It’s all about the quality of life for residents,” Rob Roy, Pacific Crest co-founder, told Energy Trust. “People who have stable housing have a much better life. A building like this goes a long way to fulfilling that goal.”

One important—and threatened—source of affordable housing in Oregon is manufactured homes. According to a 2017 report from the nonprofit Prosperity Now, 42% of Oregon’s manufactured housing stock is affordable, compared with 21% of housing statewide. But as The Oregonian reports, dozens of parks have closed in recent decades.

And not all manufactured homes are good quality: Prosperity Now says nearly half the state’s manufactured homes were built before 1980, which is just a few years after the federal government started regulating manufactured homes. That means many residents are dealing with problems like poor insulation, air leakage, and inefficient windows and heating systems.

Energy Trust in 2018 launched a pilot program to replace aging manufactured homes with energy-efficient ones. Along with improving living conditions for residents, the pilot aims to build partnerships, leverage additional funding sources and create a model for combining energy efficiency, poverty alleviation and affordable housing investments that can be replicated across Oregon.

The first participant in the pilot was the Oak Leaf manufactured home park on NE Killingsworth Avenue in Portland. In 2016, word reached residents the park owner planned to sell to a developer. Instead, residents worked with St. Vincent de Paul in Lane County and other groups including Living Cully and Verde to buy the property with help from the City of Portland. The city has since added zoning protections for manufactured home parks.

At Oak Leaf, the new owner set out to replace aging homes and repair infrastructure. They partnered with Energy Trust, which provided expertise and $220,000 in incentives to help replace 21 units. The renovated park includes a solar-powered community center with a meeting room, food pantry and laundry facility, which was built with support from Energy Trust incentives.