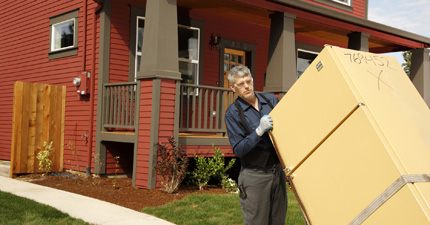 Since launching its fridge recycling service, Energy Trust of Oregon estimates it has helped Oregonians unplug and recycle approximately 70,000 energy-wasting refrigerators. Laid end to end they would equal the length of 1,000 football fields. As a result, Energy Trust estimates that it has helped recycling participants save a total of $4.2 million on annual energy bills and 39 million kilowatt hours of electricity—enough to power 3,200 average Oregon homes for a year.

In August 2008, Energy Trust began offering cash incentives to people in communities served by PGE and Pacific Power across the state in exchange for their old refrigerators and freezers. The appliances were then recycled free of charge. Because refrigerators built before 1993 can use two to three times more energy than new high-efficiency models, recycling is an easy way to make an immediate difference and help save hundreds of dollars on the household energy bill.

“Older refrigerators and freezers can use a surprising amount of energy compared to today’s more energy-efficient models,” said Matt Braman, residential program manager, Energy Trust. “For those keeping an older, second fridge in their garage or basement, simply unplugging and recycling it can save up to $200 a year in energy costs.”

In addition to the energy savings, an estimated 5,250 tons of metal, 875 tons of plastic, 350 tons of foam and 105 tons of glass has been kept out of the waste stream through participants taking advantage of Energy Trust’s recycling service.