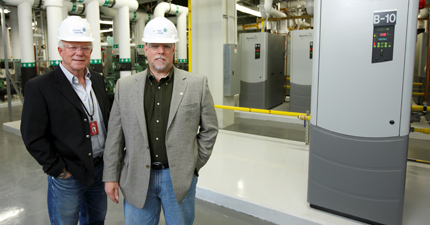 Oregon maintained its rank as the fourth most energy-efficient state in 2012, according to the American Council for an Energy-Efficient Economy, ACEEE. States are ranked according to the nonprofit organization’s State Energy Efficiency Scorecard, which benchmarks states according to policies and programs they have in place to improve energy efficiency in homes, businesses, industry and transportation.

Oregon and California are the only two states to have ranked in the top five nationally every year the report has been produced. Massachusetts retained its top ranking in 2012, followed by California and New York in second and third places, with Vermont rounding out the top five. As a group these states have led the nation in making broad, long-term commitments to developing energy efficiency as a resource.

Oregon received 37.5 points out of a possible 50. Factors contributing to this score include Oregon’s building energy codes, state tax credits and efficiency programs such as those administered by Energy Trust for electric and natural gas customers. To date no state has scored a perfect 50 out of 50 points, showing that continuing opportunities exist to further improve energy efficiency.

Energy Trust of Oregon is referenced in the report as successfully administering energy-efficiency and renewable energy programs for Oregon customers of PGE, Pacific Power, NW Natural and Cascade Natural Gas. The report notes that Energy Trust “has achieved significant success in a short time. Since its creation in 2002 the organization has rapidly developed and implemented a comprehensive menu of programs and services for customer energy efficiency.” The work of the Northwest Energy Efficiency Alliance and the Bonneville Power Administration also contributed significantly to Oregon’s fourth-place rank.