The first small community solar project approved in Oregon is also the only participant-owned project so far under a new state program that helps more people benefit from solar energy.

The project was organized by the grassroots group Solarize Rogue, a nonprofit created in 2017 to help promote solar energy in the Rogue Valley following adoption of the City of Talent’s clean energy action plan.

Launched in January 2020, the Oregon Community Solar Program is a great option for renters, people who live in apartments and other customers who want to use solar energy but may not have a sunny roof of their own or the funds to invest in a standalone system. Community solar participants are credited through their electric bills for their portion of the energy generated.

Through a series of community meetings and other outreach efforts, Solarize Rogue recruited 16 households–11 homeowners and five renters–and put together a plan to meet their needs.

“Most community solar is a ‘build it and they will come’ kind of thing,” said Ryan Cook, Energy Trust’s program manager for community solar. “Here, Solarize Rogue held community meetings, got households to buy in and designed a system to support them.”

In addition, since all community solar projects must reserve 10% of their capacity for low-income participants, the group worked with Rogue Climate to recruit three households with low incomes to subscribe to the project. These customers will receive deeper savings on their energy bills through their subscriptions.

The group partnered with the Oregon Shakespeare Festival, whose production building in Talent had a large roof with great sun exposure. After several months of planning and coordination between state regulators, local utility Pacific Power and Solarize Rogue, 362 solar panels were installed by Energy Trust trade ally True South Solar in August 2021. The expected first-year generation is more than 172,000 kilowatt hours.

Organizers hope to have the system powered on by the end of the year, and Oregon Clean Power Cooperative has signed on to manage the project. (OCPC helped Oregon Shakespeare Festival install a separate solar system on the roof alongside the community solar project to help power the production building.)

Energy Trust, which helps administer the Oregon Community Solar Program as a subcontractor, also offers incentives to help public or nonprofit organizations and developers of small-scale projects navigate the financial and technical hurdles of a typical community solar project and gain experience in developing community solar.

Solarize Rogue is now looking for a site to house its next community solar project. Sanchez-Pescador said given the high interest in solar in Southern Oregon, it is aiming to double the capacity of the first project. 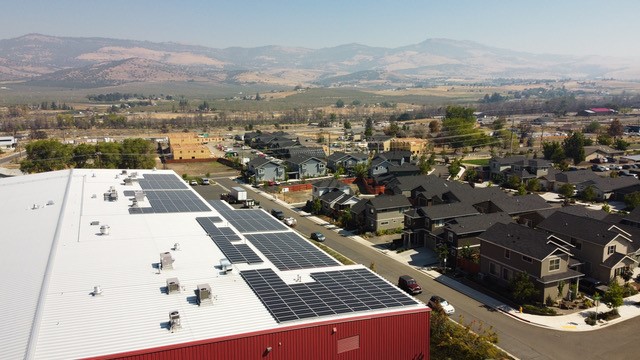