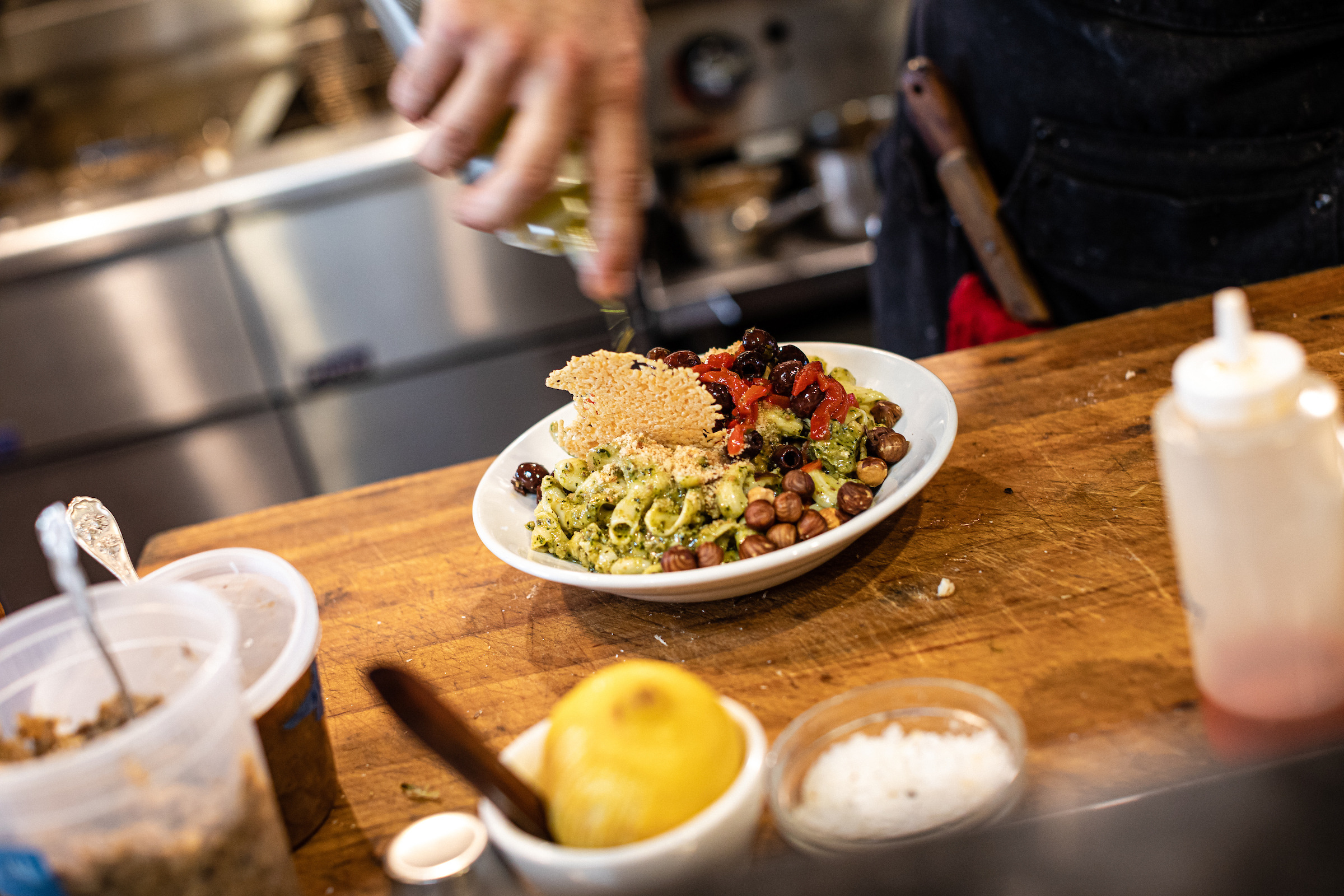 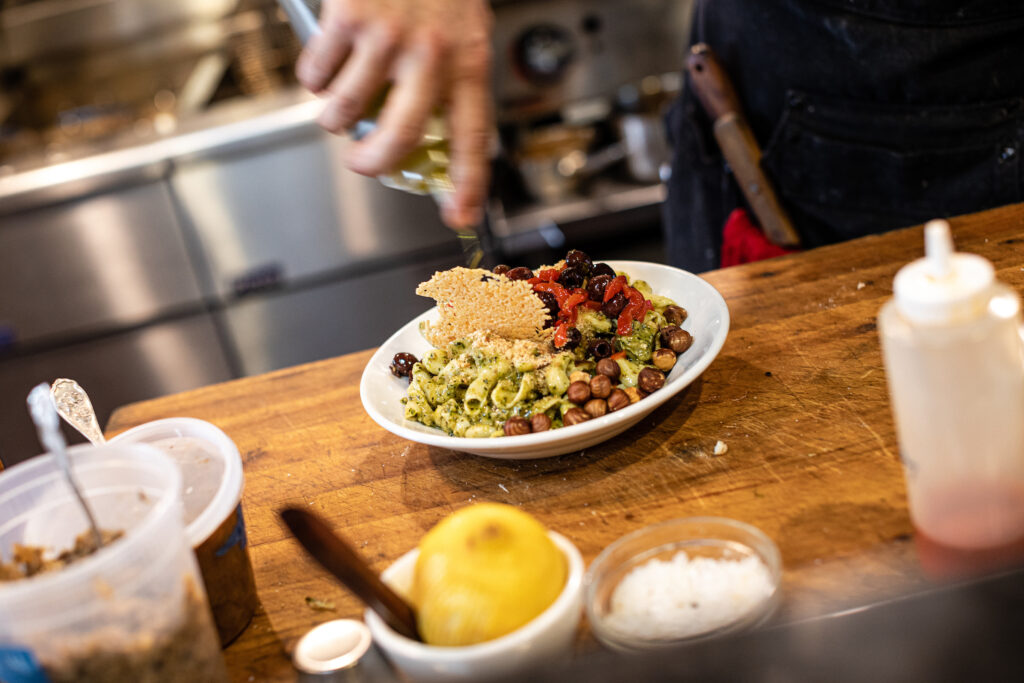 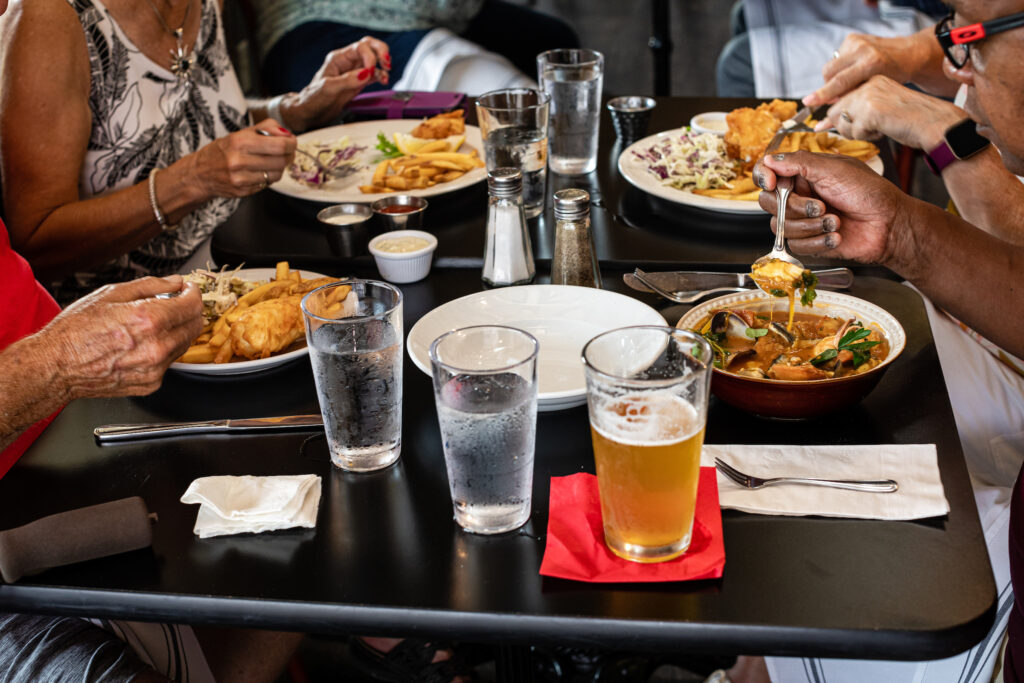 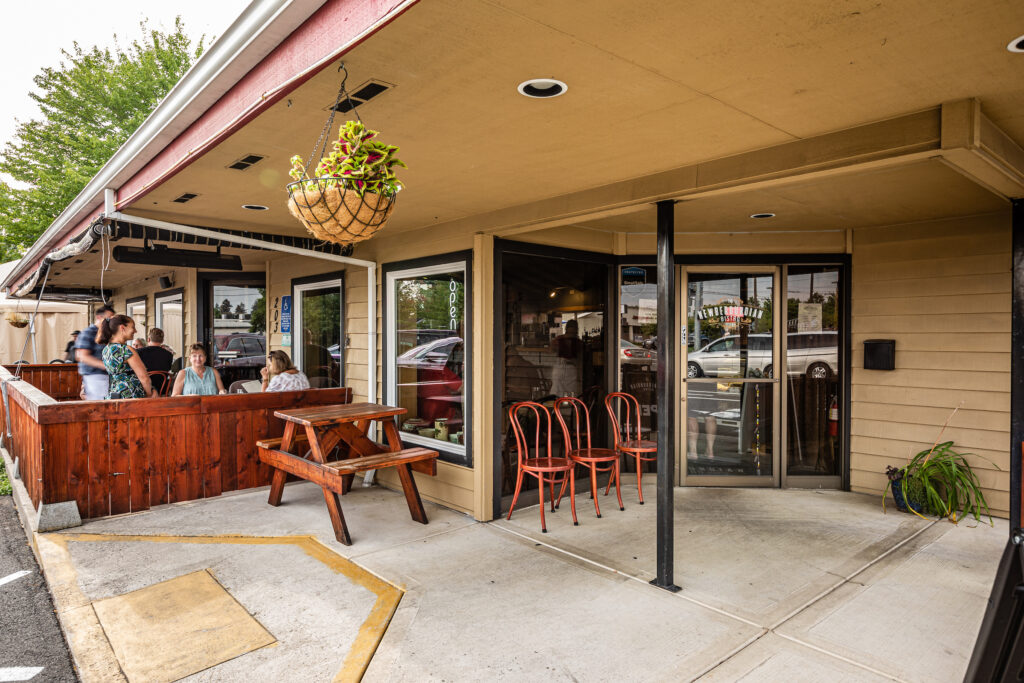 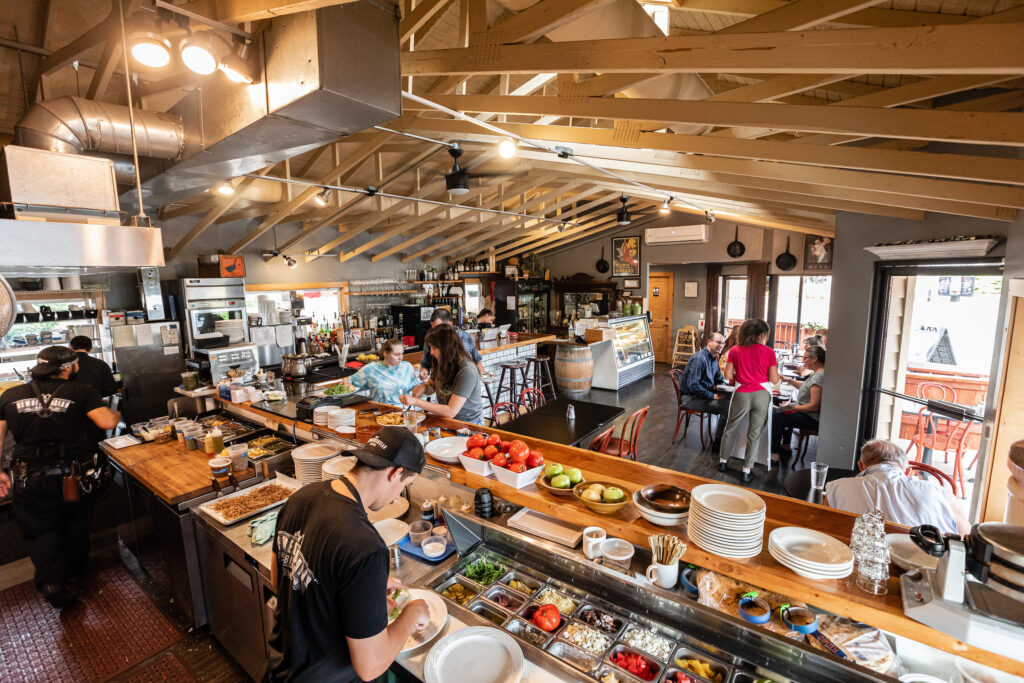 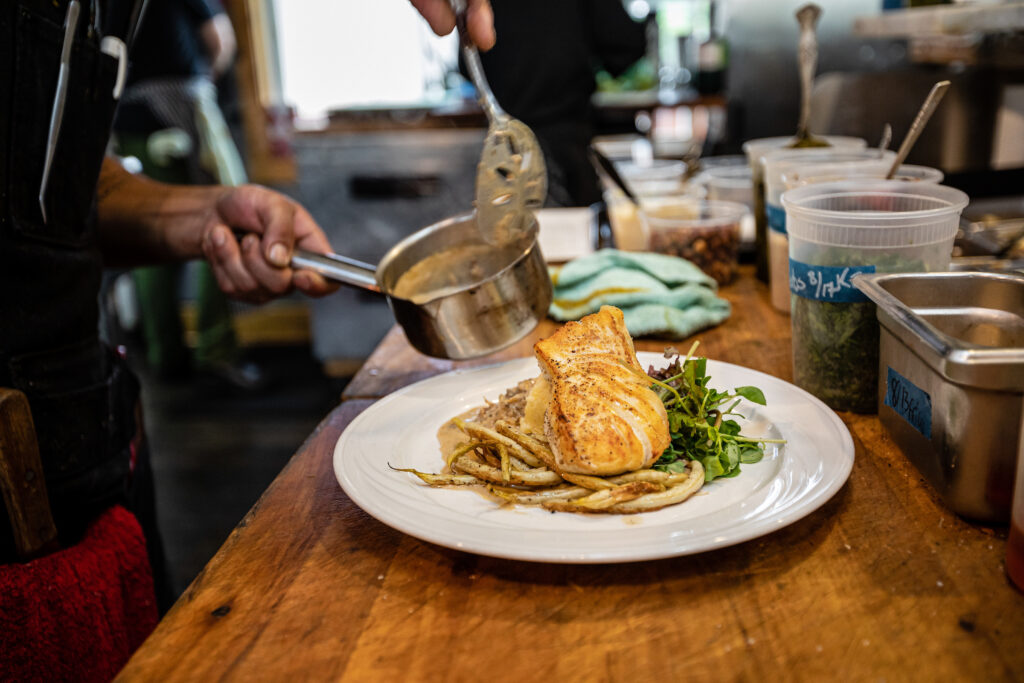 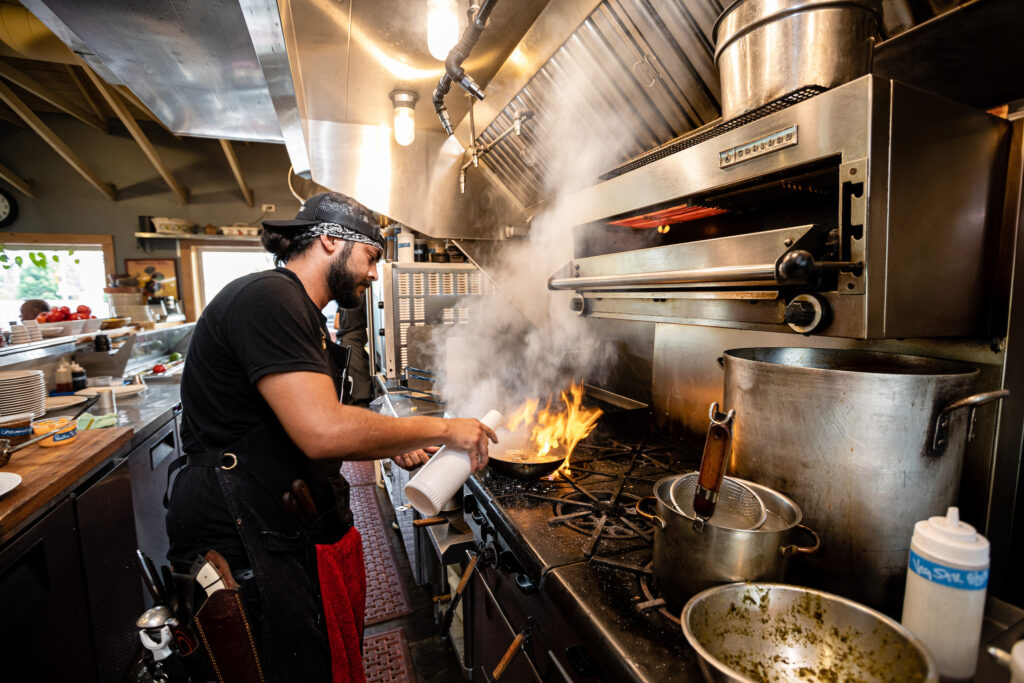 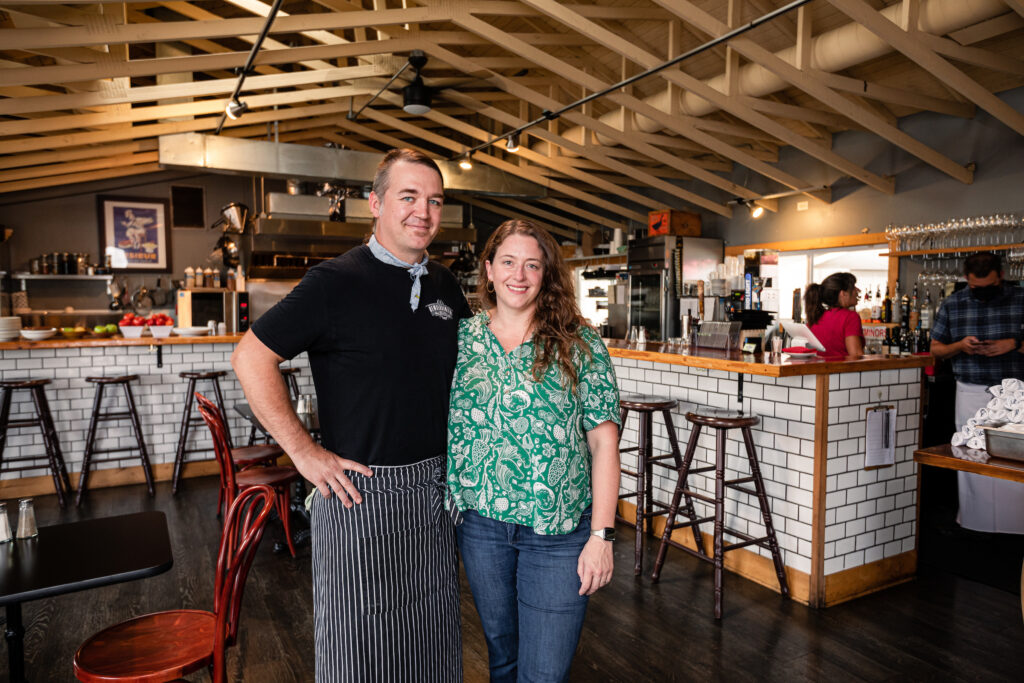 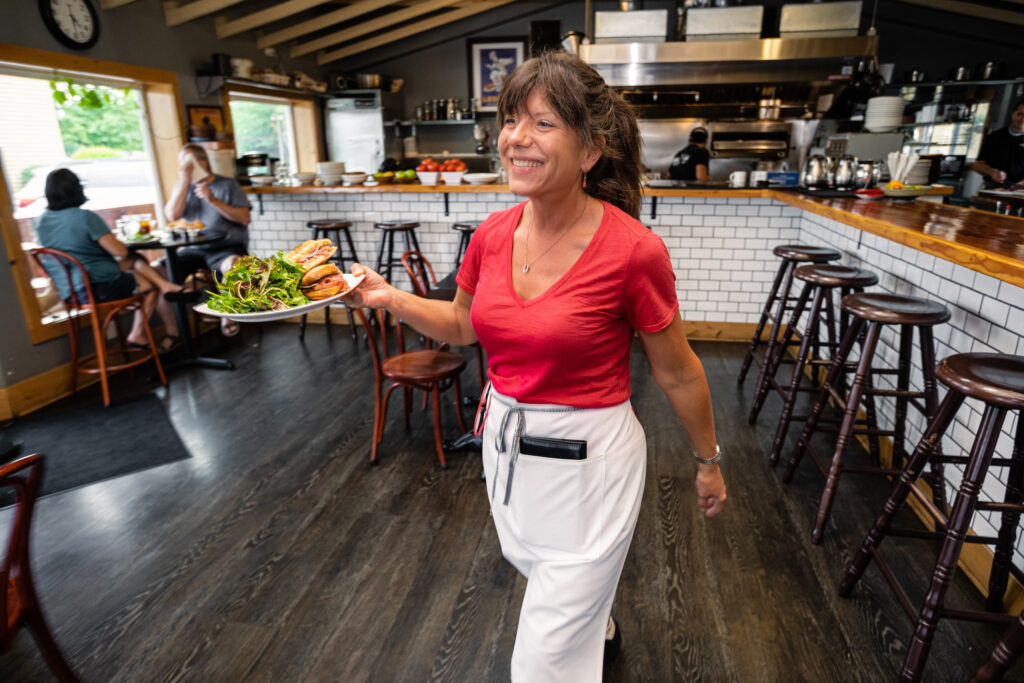 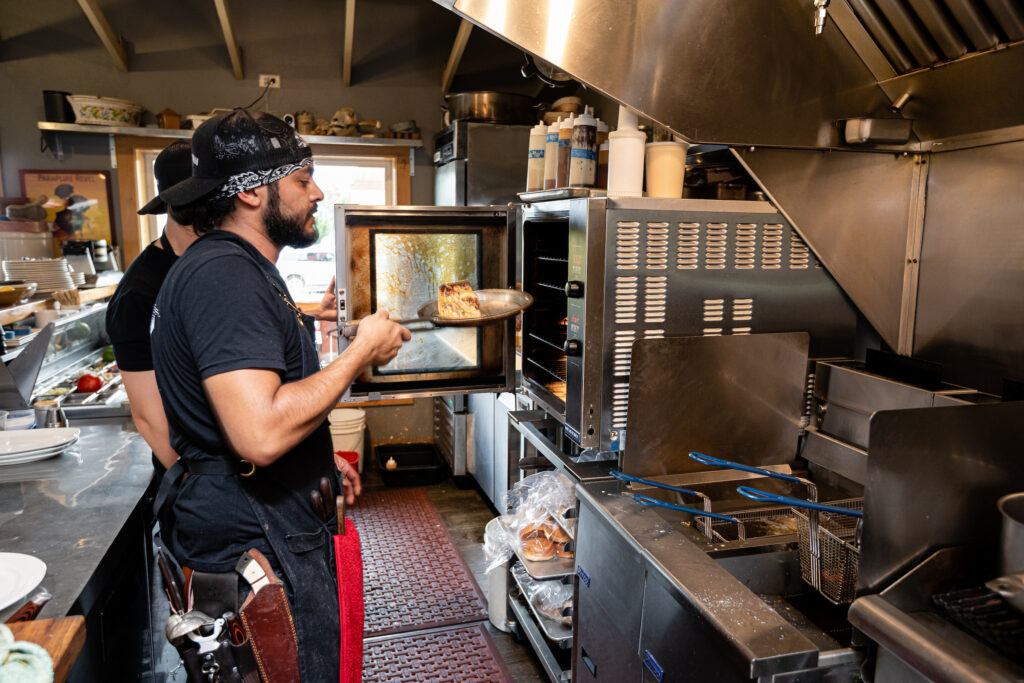 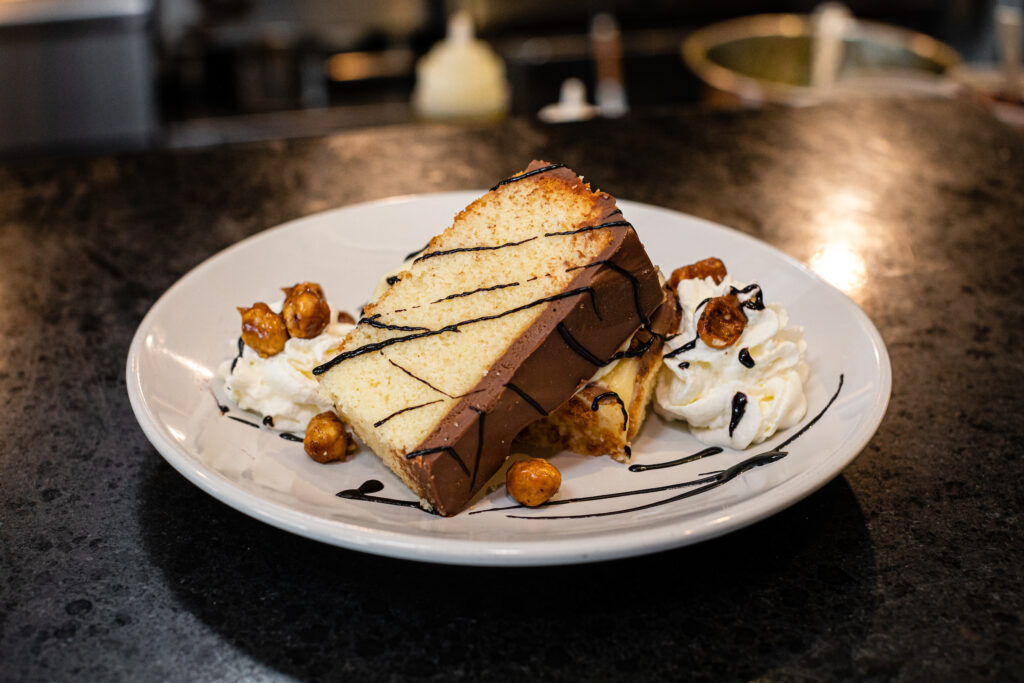 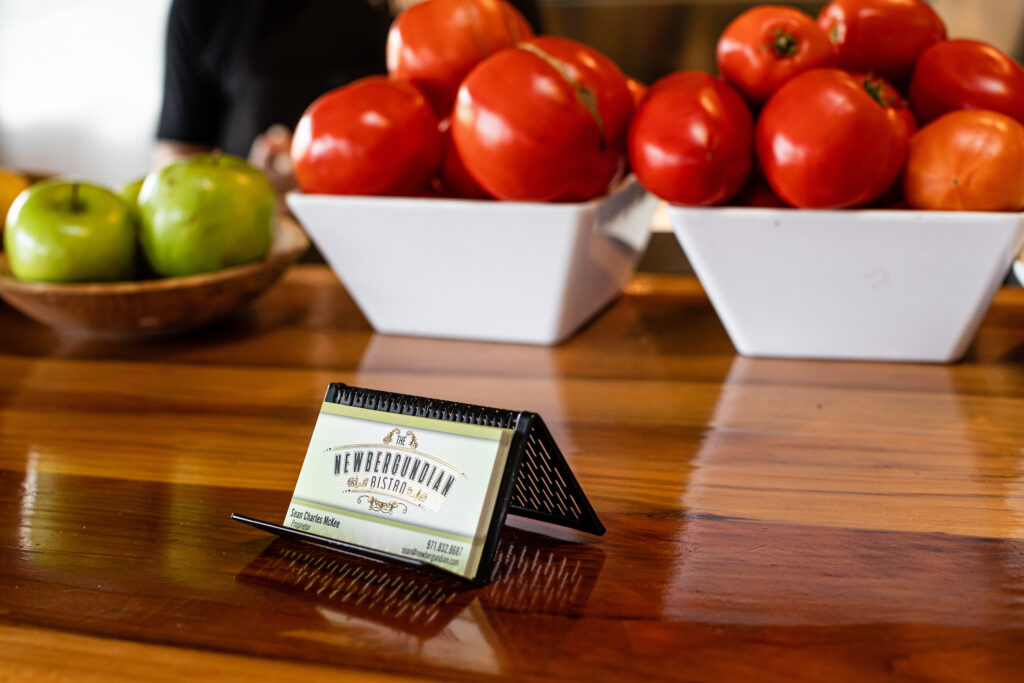 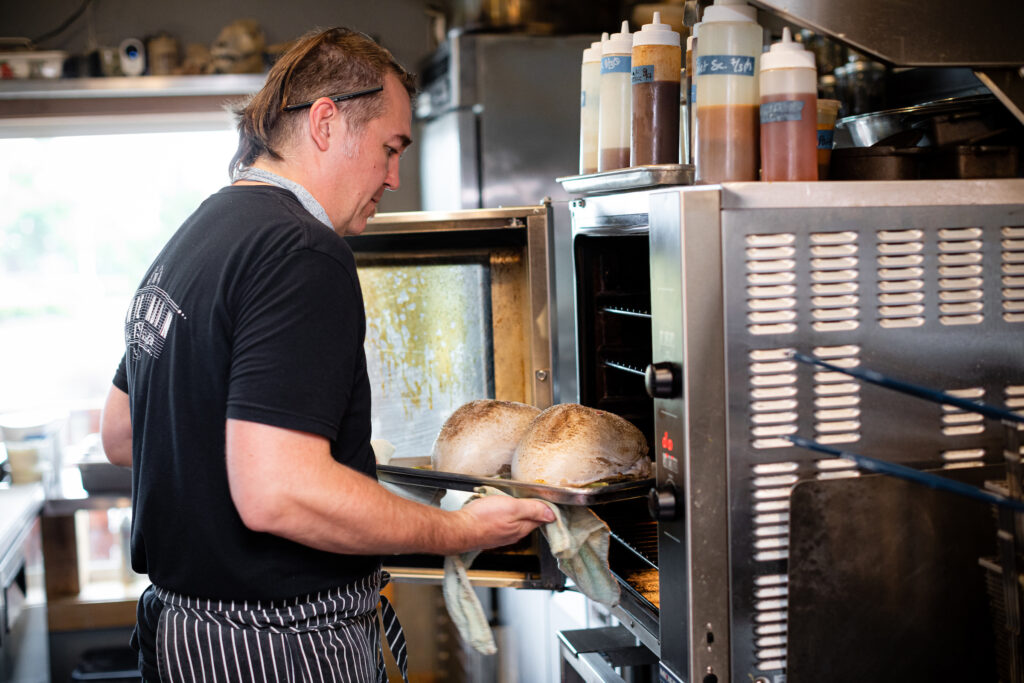 Serving great food in a charming building with a half-century’s worth of quirky history is just part of what Noelle and Sean McKee do.

The couple got into the hospitality business in the first place because of their love of agriculture and viticulture. Now, as owners of the Newbergundian Bistro, at the north end of the Willamette Valley wine country town of Newberg, they promote sustainably raised crops and livestock, support local farmers and vendors, and strive to be as energy efficient as possible.

So, it was an easy call to take advantage of Energy Trust of Oregon’s cash incentives in April when they decided to buy a second oven for their bustling 4-year-old restaurant.

The Newbergundian’s new Moffat Turbofan electric convection oven just might be the hardest-working appliance in the building.

“We’re in and out of it all the time,” said Sean McKee, the Newbergundian’s head chef, who draws from two decades of culinary experience as well as training in France to shape the restaurant’s contemporary American menu.

The oven’s day begins at five in the morning when the pastry chef shows up to make bread, rolls, cookies, eclairs, cakes, and more. By eight, the savory chefs have taken over the oven, roasting ingredients such as bacon, beets, and chicken as part of their prep work. Once the Newbergundian opens for lunch at 11, the staff is continuously using the oven to warm appetizers, entrees, and desserts, all the way through happy hour and dinner. Not to mention brunch on the weekends.

Between the baking, the roasting, and the 100 to 200 meals a day the restaurant is serving, “I think that door opens and closes, honestly, five, six, or 700 times a day,” Sean McKee said.

Despite all that activity every Wednesday through Sunday, the Newbergundian’s energy bills haven’t gone up, Noelle McKee said. While other costs have increased during a year of notable inflation, the restaurant’s energy costs have stayed about where they were last year, which she called “a welcome development.” The McKees also received a $500 cash incentive from Energy Trust to help reduce the cost of the more energy-efficient oven.

Noelle McKee said Energy Trust “couldn’t have made it any easier” to get the oven and the cash incentive. She and her husband chose the model and the retailer. When they picked up their oven at Pitman Restaurant Equipment in Southeast Portland, the store had the forms ready and waiting. “The paperwork was easy to fill out and easy to return,” she said. “And the follow-up and turnaround were quick and simple.”

The McKees had just as positive an experience buying a new fryer for the Newbergundian last year, she said. The fryer also came with a cash incentive from Energy Trust.

Noelle McKee said she would “wholeheartedly” recommend working with Energy Trust to other restaurant owners looking to upgrade their appliances to more energy-efficient models .

“We’re just grateful that this program exists, and we hope that additional people can take advantage of it in the future,” she said.

Learn more about energy efficiency for your business with Energy Trust.