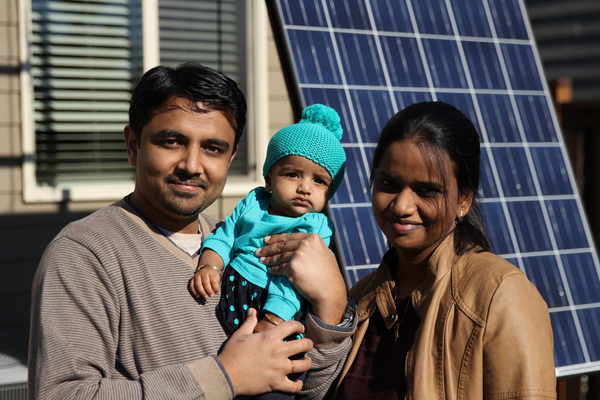 This fall, solar panels went up on the 5,000th Oregon home to install solar power with help from Energy Trust. By connecting 5,000 solar-powered homes to the grid, Energy Trust estimates it has helped Oregon avoid adding 7,100 tons of carbon dioxide to the atmosphere—the equivalent of removing 1,250 cars from Oregon roads for a year.

Energy Trust solar trade ally contractor SolarCity installed the 5,000th solar system on the Northwest Portland home of Anbu Varatharajan, Durga Nallathambi and their 4-month-old daughter. Last fall, the family moved into their newly-built home, which already boasts a number of energy-efficiency features—it’s both ENERGY STAR® rated and features an EPSTM, Energy Trust’s energy performance score. While the couple had an interest in sustainable energy, they were not yet sure if solar fit their budget. Energy Trust cash incentives helped bridge the gap.

“We thought adding solar would be very expensive, until our neighbor went through the process,” explained Varatharajan. “We were able to work with our contractor on a solar lease plan, which meant no out-of-pocket cost for us right now, but we can still make a positive environmental impact, and of course an impact on our energy bills.”

Energy Trust began offering solar incentives for residential customers of Portland General Electric and Pacific Power in 2003 to help offset the upfront cost of going solar. When combined with currently available state and federal tax credits, the incentive helps homeowners save up to 80 percent off the cost of installation.

Since Energy Trust began supporting solar projects, the solar scene has also evolved. Due to growing demand in the marketplace, costs have lowered by about 43 percent for the average 3-kilowatt system over the past five years. Plus, new opportunities such as neighborhood Solarize projects and solar leasing are making it easier for even more people to take the plunge. Energy Trust has also seen its roster of trade ally contractors that install solar systems expand from 36 in 2003 to a current count of 123 statewide.

Learn more about Energy Trust’s support for residential solar electric installations, and read about the experiences of the first, 1,000th, 2,000th, 3,000th and 4,000th system owners.