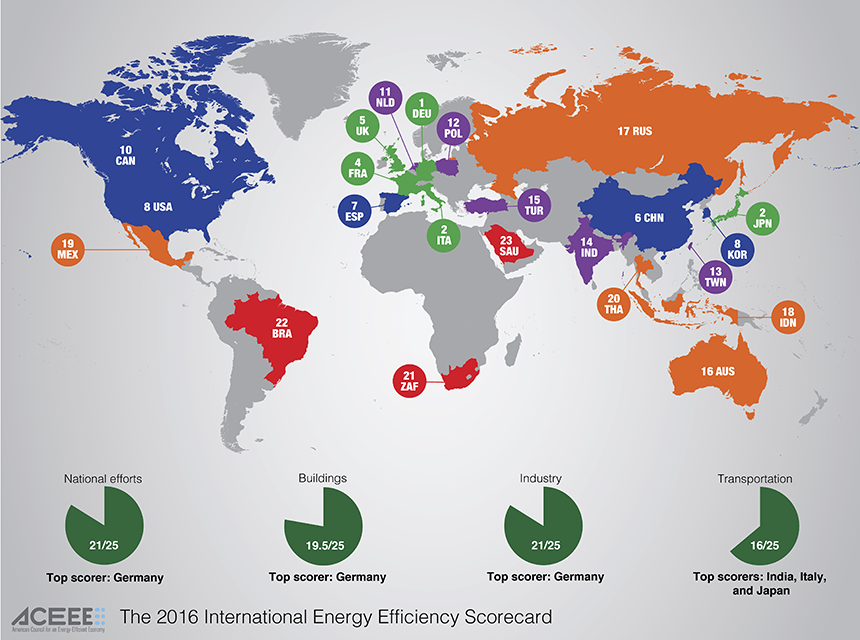 In July, the American Council for an Energy-Efficient Economy, ACEEE, released its third edition of the International Energy Efficiency Scorecard. The United States rose in the international rankings from 13 in 2014 to eight in 2016, tied with South Korea and coming in behind Spain and China. Germany continues to lead the world in energy efficiency. Together, the 23 countries ranked in the scorecard represent 75 percent of all the energy consumed across the globe and over 80 percent of the world’s gross domestic product. The ACEEE scorecard ranks the world’s 23 largest energy-consuming economies on their energy-efficiency policies and programs on a scale of 100 points. Thirty-five different energy efficiency indicators were analyzed, with countries earning points in four different categories, including buildings, industry, transportation and national effort, which measures overall or cross-cutting indicators of energy use at the national level.

ACEEE awards the highest score possible for each metric to at least one country, meaning that a country can obtain a score of 100 if it demonstrates top practices and results in each metric. In 2016, no country scored full points on all the metrics, indicating that all of them have room for improvement.

A number of new metrics added to the report in 2016 helped to boost the U.S. rank, as well as the nation’s improvements in energy intensity, energy use per dollar of GDP and a change in scoring methodology that weighted higher for policy actions.

The report highlights areas of improvement for the U.S. to improve its score: “Despite its leadership on a number of policies…The United States still has no binding energy savings goals, unlike Germany, France, Japan, and other countries which have a national energy conservation plan in place. The United States could take advantage of existing efficiency opportunities by mandating building energy use disclosure policies and categorical labels for appliances.”