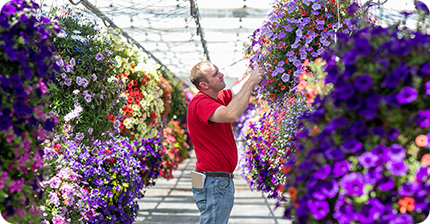 The association and its growers immediately realized that they could not attain such an ambitious goal without technical and financial assistance. Energy Trust has helped the industry make significant progress by connecting growers with cash incentives to help them install energy-efficiency improvements. To publicize the available incentives, Energy Trust reaches out to OAN members through direct mailings, advertisements in Digger magazine and attendance at OAN meetings and functions.

Energy costs for greenhouses can be a significant piece of operating expenses, and it makes sense to invest in energy-efficient greenhouse and nursery equipment. A heated greenhouse can save 30 percent in natural gas by reglazing alone. Irrigation upgrades can save 10-35 percent in electricity and also save water.

As a result of improvements, energy projects completed at Oregon nurseries have saved $500,000 per year since 2009, according to OAN. That is sustainable not just from an environmental perspective, but a financial one as well.