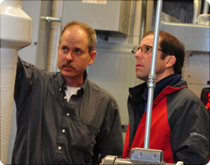 Oregon Institute of Technology’s Klamath Falls campus dedicated the state’s first geothermal heat and power plant in April 2010. In Klamath Falls, many homes and businesses use geothermal heat for building heating, sidewalk snow melting and other activities. The campus has been heated by geothermal energy since 1964, and its Geo-Heat Center is widely known for geothermal research and development. The plant will continue to provide heat for the campus, while generating more than 650,000 kilowatt hours of electricity each year. OIT received a $487,000 incentive from Energy Trust and a $100,000 Blue Sky grant from Pacific Power.