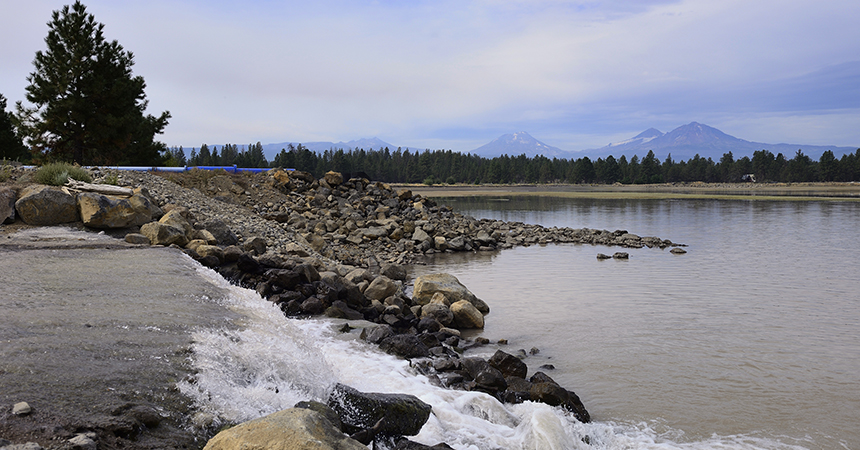 Energy Trust’s work to save energy and generate renewable energy is also helping improve the reliability of rural waterways.

In the West, agriculture can account for more than 90% of consumptive water use, which is water that is permanently withdrawn from its source, according to the U.S. Department of Agriculture. (Non-consumptive use is water that can be treated and reused.) And in rural communities that rely on century-old infrastructure, up to 50% of water in open irrigation canals may be lost to seepage or evaporation, depriving rivers, farmers and ranchers of the water they need.

Piping irrigation systems does more than deliver water for irrigation. By getting rid of open canals, piped systems allow more water to stay in the rivers and streams that irrigation systems pull from. This is especially critical at times when stream water is less reliable due to drought or seasonal demand.

To see the success of irrigation modernization and water reliability in action, look no further than Whychus Creek in Central Oregon. For the first time since the late 1800s, summer flows recently returned to the creek, which Three Sisters Irrigation District draws from. Officials hope to see the return of salmon and steelhead in the coming years.

Because of the multiple energy and non-energy benefits of irrigation modernization, the program has drawn a substantial public and private partnership from federal, state and regional entities eager to achieve a win-win for rural Oregon communities. Projects have brought in funding from 15 federal and state agencies totaling nearly $50 million as of 2019.

“We started modernizing about 20 years ago,” Marc Thalacker, manager of the Three Sisters Irrigation District, told Energy Trust. “Back then we had to do it all on our own. Thanks to this new, collaborative approach, things can really start to move much more quickly.”

A notable benefit of modernizing is the ability to add hydropower generation capability to farms and districts. By generating and selling clean power, districts gain a revenue source to offset the costs of the infrastructure improvements.

Nearby, Swalley Irrigation District is also working to pipe its open canals. As of early 2020, the district has piped 16 of its 28 miles of canals, according to The (Bend) Bulletin.