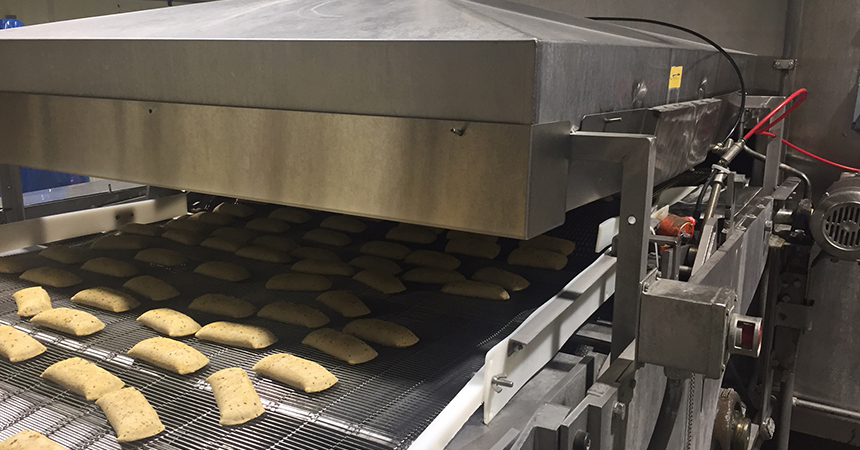 It takes a lot of energy to produce 13 million pounds of sandwich pockets and 5 million pounds of raised dough products annually, which is why J&J Snack Foods in Weston, Oregon, jumped at the chance to join Energy Trust’s Strategic Energy Management (SEM) offering at the beginning of last year. “We spend about $500,000 a year on electricity costs,” said Richard Boyer, plant manager. “We figured if SEM could trim that by $25,000 to $50,000, why not give it a try?”

As part of the Northeastern Oregon SEM cohort, J&J and other manufacturers have been meeting monthly with Energy Trust’s technical experts to focus on behavioral changes and no- or low-cost operations and maintenance improvements that deliver significant and persistent energy savings.

J&J formed an energy team with representatives from throughout the plant and set a goal to reduce electricity by 5 percent, or 225,000 kilowatt-hours, per year. “We’re on target to almost double that,” said Boyer.

The energy team spent a day going through the plant with our energy experts to look for savings opportunities. “We discovered we had quite a few compressed air leaks we didn’t know about,” said Boyer. J&J was also using compressed air to remove scrap dough after it’s trimmed from the sandwich pocket line. “That was a costly and unnecessary use of compressed air, so we’ve redesigned our conveyor belt to remove the dough another way. We did all the work in-house.”

The plant’s 400º F cooking ovens offered additional operations and maintenance savings. J&J replaced latches and high-temperature seals on the oven doors and added special skirting to keep in the heat. “That’s been a big win because we not only save energy, but keep the plant more comfortable for employees,” said Boyer.

SEM also helped J&J rethink processes it has been doing for years, such as using compressed air to create compressed fiber board slip sheets for use on all its pallets. Gerard Law, vice president of operations, questioned why that was standard practice when only about 80 percent of products require a slip sheet. The answer: “We’ve always done it that way.” As a result, J&J cut down on its use of slip sheets, delivering even more compressed air savings.

“That’s one of the big plusses of SEM,” said Boyer. “In a facility like this, we get so focused on production and quality that we don’t stop to think about other factors. SEM prompts you to stop and think about why you’re doing things a certain way and at what cost.”