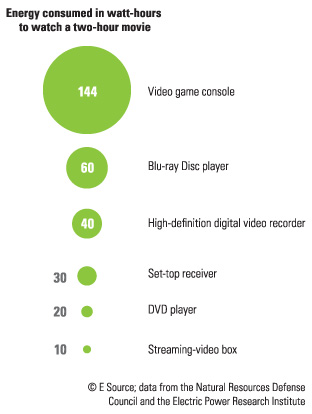 Now that chilly winter evenings are here, Oregonians are gearing up for more couch time. How energy efficient are your TV habits?

DVD or Blu-ray players are another popular way to watch movies, but the energy use associated with using these devices varies dramatically. Stand-alone DVD players are typically the most efficient, drawing around 10 watts of power (a little less than a standard compact fluorescent light bulb) when in use. In contrast, a stand-alone Blu-ray player can draw over three times as much power, and a video game console can use six times as much power. Streaming videos with your game console is the most energy-hogging option.

Finally, many people now stream video content on an Internet-enabled TV or through a separate box such as an Apple TV, Roku or Google TV. Streaming is the most efficient way to watch movies or TV shows, drawing as little as 5 watts of power when in use. That’s half the power of a DVD player and less than one-third the power of a standard set-top box.

Want to measure your TV’s energy use down to the watt? Check out a Kill A Watt® monitor from your local library to measure the energy use of appliances in your home. If it’s time to buy new equipment, maximize your energy savings with ENERGY STAR® qualified TVs and home electronics.