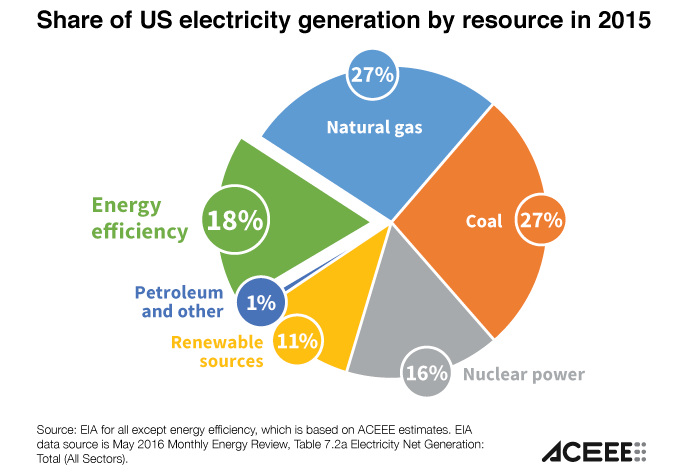 There are two ways utilities can meet increasing electricity demand—by generating more electricity or by encouraging energy-efficiency investments to reduce energy use. In this way, energy efficiency is a resource similar to power plants, wind turbines or solar panels—and it’s the cleanest, lowest-cost energy resource available. If energy efficiency is considered a segment of our nation’s electricity resources, based on ACEEE estimates, it would count as 18 percent of total generation in 2015.

According to the ACEEE’s report, while the economy grew since 1980, energy use increased at a much slower place. From 1980 to 2014, U.S. gross domestic product increased by nearly 150 percent—and energy use increased by just 26 percent. Without the energy efficiency investments made in the U.S. since 1990, the equivalent of 313 additional large power plants would be needed to meet the country’s energy needs today.

The Northwest Power and Conservation Council estimates that energy efficiency is the second largest electricity resource in the Pacific Northwest, second to hydropower. Since 2002, Energy Trust helped Oregonians save and generate 667 average megawatts of electricity and save 45 million annual therms of natural gas, equivalent to the output of a power plant fueled by efficiency and renewable energy.