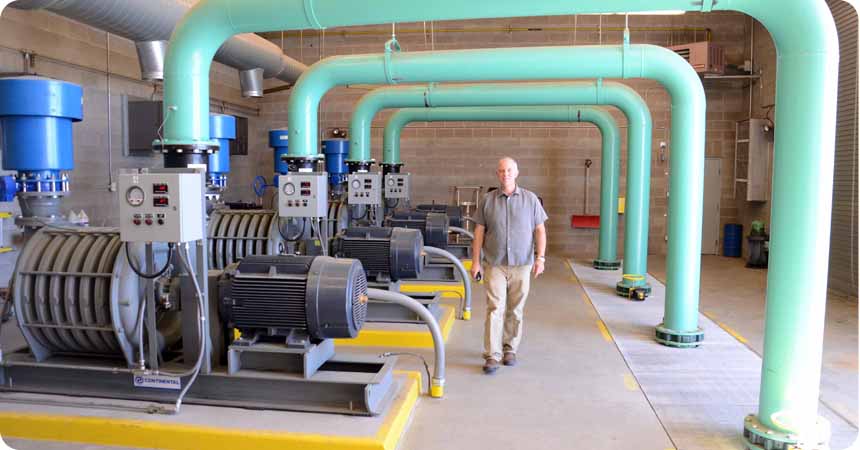 An ongoing initiative to save energy and cut electricity use and operating costs at the South Suburban Sanitary District, SSSD, in Klamath Falls is adding value to the community and to its ratepayers. Thanks to a recent investment in new, energy-efficient technology at the district’s wastewater treatment plant, SSSD earned $77,125 in cash incentives from Energy Trust of Oregon and expects to save 40 percent on its annual electricity bill.

Serving commercial businesses and residences in Klamath County and parts of Klamath Falls, SSSD, which is served by Pacific Power, processes an average of 2.7 million gallons per day of wastewater. Treating all that wastewater is an energy-intensive process, which means District Manager Michael Fritschi pays close attention to advancements in technology and equipment that will improve treatment, lower energy consumption and reduce the district’s overall carbon footprint.

SSSD’s plant uses four lagoons as part of its process, including one aerated treatment lagoon. Prior to the equipment upgrade, air was introduced to the wastewater through an older system of coarse bubble diffusers spaced throughout the lagoon. The coarse bubbles provide aeration and keep the sediment in the aerated lagoon mixed, but the oxygen transfer efficiency tends to be fairly low.

The solution to the aeration diffuser problem was a hybrid system that would keep sediment mixed, provide sufficient air and use less energy. One of the first installations of this technology on the West Coast, the project entailed replacing 328 coarse bubble aeration diffusers with 63 efficient diffusers capable of providing a combination of coarse bubbles for mixing as well as fine bubbles for improved aeration efficiency. The fine bubble diffusers increased the oxygen transfer efficiency, which reduces the system’s overall energy load.

“This project is part of an overall energy reduction strategy,” continued Fritschi. “This fiscal year we’ve budgeted 33 percent less for all utility costs than in the last nine fiscal years on average. With utility costs going up, we rely on investments like this one to help us meet our goal. Our community and ratepayers count on us to control costs to keep future rates stable and maintain our long-term financial health.”

The district estimates the project will save 334,850 kilowatt hours of electricity annually, which is equal to the amount of energy needed to power 30 average homes for one year. Learn more here.